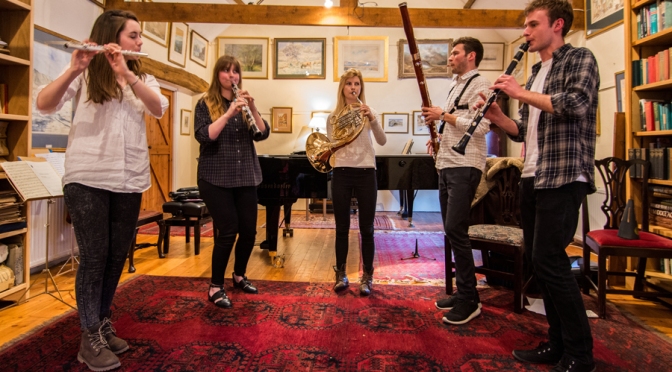 Not only is the the Two Moors Festival’s residency project serving its purpose, but it also creates an atmosphere of the utmost fun within the Adie household. This doesn’t mean to say that routine life is dull – far from it!

This week has seen Notus Winds, one of the most talented wind ensembles to burst onto the concert scene, rehearsing in our studio in preparation for the Nielsen competition held later in the year. As you can imagine, this quintet has been high on the agenda along with a diverse range of works that included the first movement of Ibert’s Trois Pièces which they decided to learn from memory.

They imposed a punishing schedule upon themselves – three hours’ rehearsal each morning, building up a healthy appetite for lunch followed by more sessions over the rest of the day. How Carys Evans’s lip stayed the course, we shall never know – but that’s suffering for one’s art.

The beauty of our residencies is that artists are completely free to run their own timetables, rummage for food and help themselves to wine (although so far, no one has gone to those lengths first thing in the morning!). In the case of this group, because the weather was so glorious, they gulped vast quantities of unpolluted air whilst striding the across the moors in their self-imposed spare time. 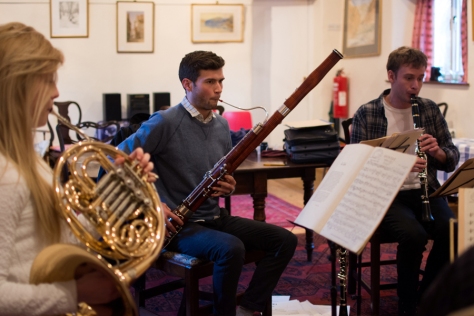 Exmoor has been at its finest this week proudly showing off its spectacular scenery, colours not to mention the first primroses appearing in the banks. I have to say that the ensemble’s interpretation of clear verbal directions differed from ours! As a result Flora, our dog, had so much exercise that she expressed no interest in going for a walk on the day the team left.

The pressures of city living are such that artists take a while to switch off. Invariably they feel the urge to practise the moment they get here thinking that they have a time limit on the availability of a hired studio. Life is very different here and it’s only after several glasses of wine and wholesome food that musicians begin to let go.

The fact that there is no payment involved (even expenses are covered) also takes a day to sink in. We notice a huge difference in the approach to work, the feeling of achievement following a constructive rehearsal, and a sense of well-being on discovering an improved level of playing. As a team, there is time to explore varied interpretations of a piece, a greater opportunity to listen to each other and to work on a better cohesive sound. 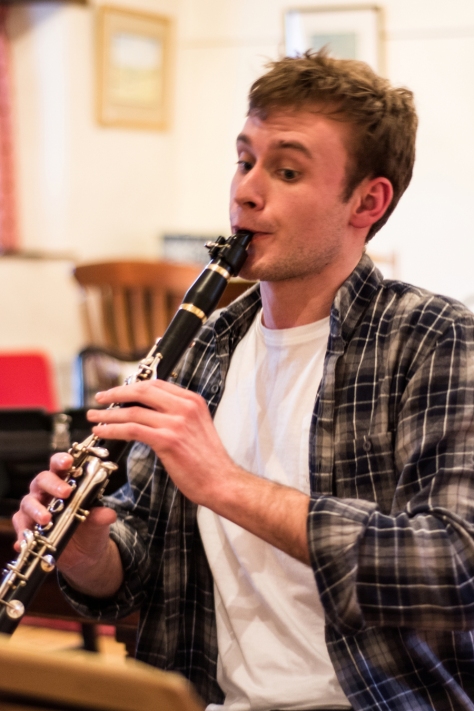 There is no doubt that residencies here play their part in the structural development of a young group of artists. This ensemble has benefited in spade loads. Their concert on the final night was of a standard equal to any recital one might hear at the Wigmore Hall. Here’s to the future of Notus Winds – they deserve to do well! 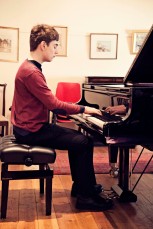 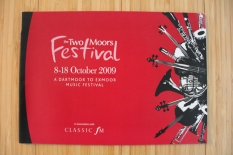