We’ve taken a bit of a break from writing about UK chamber music festivals on the blog this week to let you know that we here at the Two Moors Festival have had a very exciting addition to the family.

Not only do we have festival dog Flora and festival cat Pip, but we’re now very happy to say that we’ve got four fat and plucky festival chickens, who have come home to roost.

If you’ve been following the festival since it started in 2001, you might well be aware that we also used to be home to some rather fantastic peacocks, which did make rather a racket while all the classical music concerts were going on. There was Poppy, Peter and Percy and, although they’ve long since gone, it’s delightful to have some more feathered friends clucking about all over the place.

Artistic director of the festival Penny Adie gave the four chickens to husband John as a Christmas present, along with a rather large coop and they’ve proved to be very successful hen-layers thus far. We’ve named them Mim, Mable, Doris and Rebecca Johnston, and we couldn’t be happier with our new additions to the family.

So the next time you come down to festival HQ for one of the lovely chamber music concerts that we put on in our gallery – or indeed for the festival itself in October – make sure you make some time to come and say hi to our little chickens. We know they’re going to be huge fans of classical music – how could they be anything but? 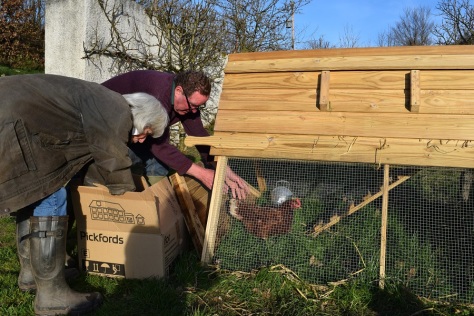